Every year the Friends of the St. Paul Public Library select an artist to receive the Minnesota Book Artist Award in recognition for an outstanding piece of work in the book arts field. This year’s award was given to Professor Steven McCarthy (Graphic Design) for his Wee Go Library. 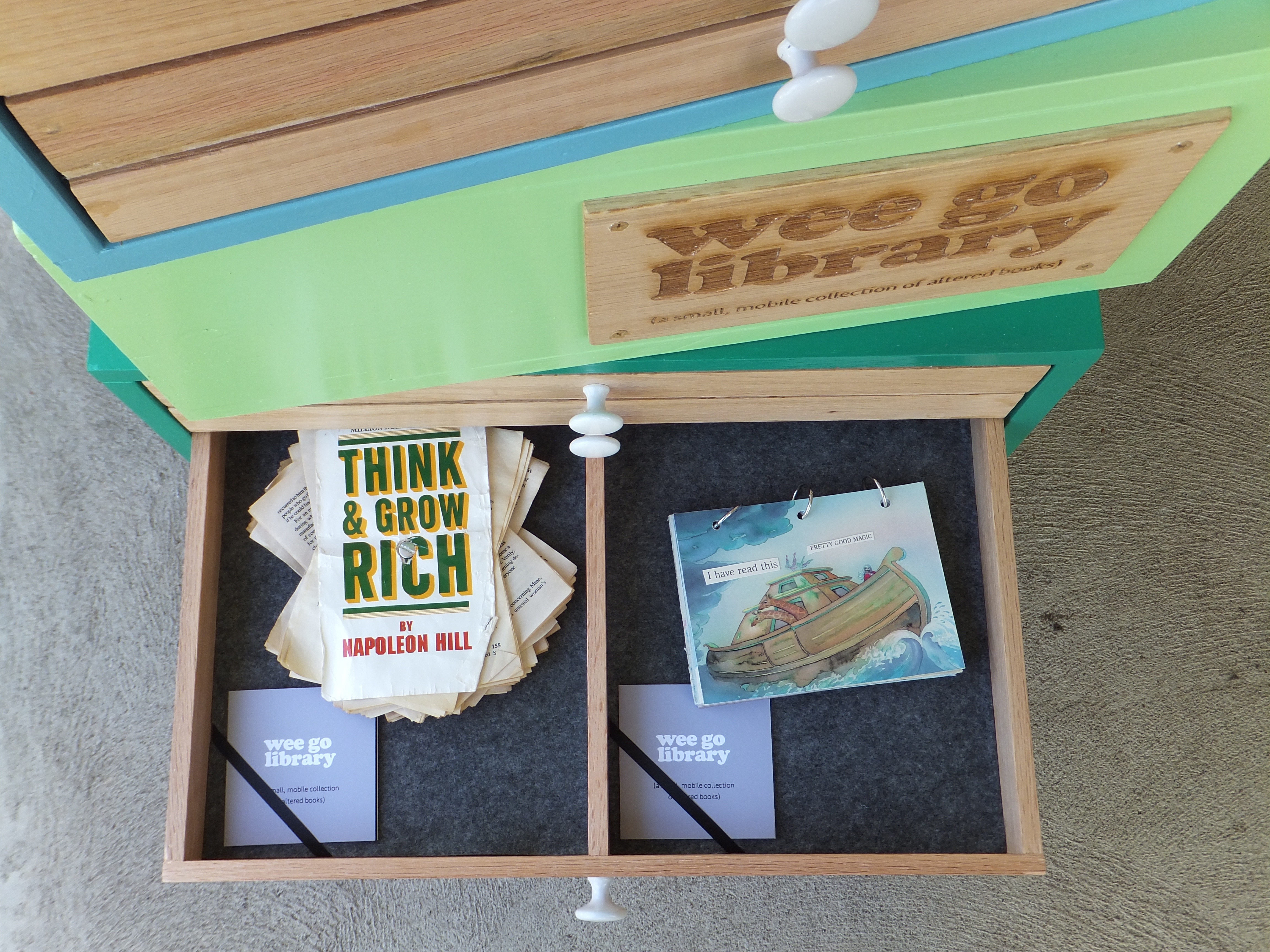 The Wee Go Library is a mobile collection of 22 altered books found in Little Free Libraries across the Twin Cities. In this interview, McCarthy discusses the work that went into creating the Wee Go Library, the idea behind it, and what he’s working on now.

Congratulations on your award! The Wee Go Library is a very intricate piece, how long did it take to create?

“It took the better part of last summer. First, I harvested books from area Little Free Libraries, manipulating them as I went and recording each location for the eventual mapping of sites. The mobile cabinet was designed and built in my basement workshop in August 2016. The project was at its mid-point when I was invited to Santiago, Chile to make a presentation about it at the Political Imagination and the City: Processes and Collective Practices in Architecture and Design conference.”

Where did the idea for the Wee Go Library originate?

I’ve been making artist’s books for 30 years, so the roots go back to my MFA Design thesis project at Stanford University – it was an experimental book about people and their oldest possessions. For Wee Go Library, one impetus was moving into the University Grove neighborhood adjacent to the St. Paul campus two and a half years ago. The neighborhood has some amazing mid-century Modernist houses on University of Minnesota land (residents own the house and lease the lot for $100 annually), but the lease requires UMN approval on all exterior renovations and states that residents must maintain “aesthetic quality” and “visual continuity” between properties. A few Little Free Libraries in the neighborhood made me wonder about the definition of this – the relationship of vernacular architecture to Modernism, of community to authority, of progress to history.

How did you select the books to work with and ultimately include within the collection?

“I traded books for those that I took, mostly good quality contemporary novels that my wife or I had read. I chose books based on their potential for reinvention, for parody, for commentary. Many Little Free Libraries’ books are self-help manuals, works of pulp fiction, children’s books, evangelical religious books, how-to guides, and so on. The one book I actually stood on the sidewalk and read for a while was Booker T. Washington’s Up From Slavery. A 1957 Picasso exhibit catalog from the Museum of Modern Art was another rare find.”

Do you have a favorite piece from the collection?

“No one favorite. But allow me to describe the interventions I enacted upon the two books mentioned in the previous answer. For Up From Slavery, I simply removed the cover and flipped it 180˚, carefully remounting it on the interior text block. It inverts viewers’ expectations to find the text upside down and makes a commentary on the book’s title, and possibly, the book’s premise (don’t judge a book by its cover or a man by his skin). For the MOMA catalog, I gleefully took on the grand ambition of remixing the work of a 20th century master: I cut Blue Period heads and mounted them on surrealist bodies, let cubist elements infiltrate Picasso’s more expressionist paintings, and collaged the curator’s essay into humorous captions.”

How did you decide on what alterations to make to each book?

“I let each book’s content and form help determine its own destiny, albeit with my particular point-of-view. As a graphic design professor, I carefully look at how literal and pictorial content communicate, and then consider how I can remix texts and images into a commentary about books, neighborhoods, and the idea of libraries as distribution networks.”

What other projects are you working on?

“I’m working on another ‘properly’ published book—a visual history of Stanford’s design program, a unique collaboration between mechanical engineering and art that began in 1958. An Imagine Fund grant allowed me to visit Palo Alto twice last summer for research; I interviewed David Kelley, and other former faculty members, and dug through archives. My manuscript is at 30,000 words so far and I’m beginning to pitch it to publishers. I also plan to design the book, furthering my philosophy of the “designer as author.”

McCarthy’s work will be on display January 20th–March 26th in the Cowles Literary Commons on the second floor of the Open Book building. The Minnesota Book Artist Award Reception to celebrate McCarthy’s achievements will take place on Friday, February 10th in Open Book.

The College of Design is pleased to announce that faculty in the School of Architecture have received four of the 2018 Association of Collegiate Schools of Architecture (ACSA) Awards.

Across the College of Design, our faculty’s research is tackling global problems and advancing their fields. This spring, 19 faculty members received grants from the University’s Imagine Fund, which supports innovative research in the arts, humanities, and design fields. Take a look at the research that our faculty members are conducting with their grants:

Students in GDes 3353: Packaging and Display partnered with a student group from the College of Food, Agricultural and Natural Resource Sciences (CFANS) last fall to create a brand identity for a proposed tap house on the St. Paul campus.