In 2017, a U of M alumna approached the University of Minnesota Alumni Association (UMAA) with an interesting idea: Create a fun, unique shirt only for members to kick off the school year and raise money to ignite student success. 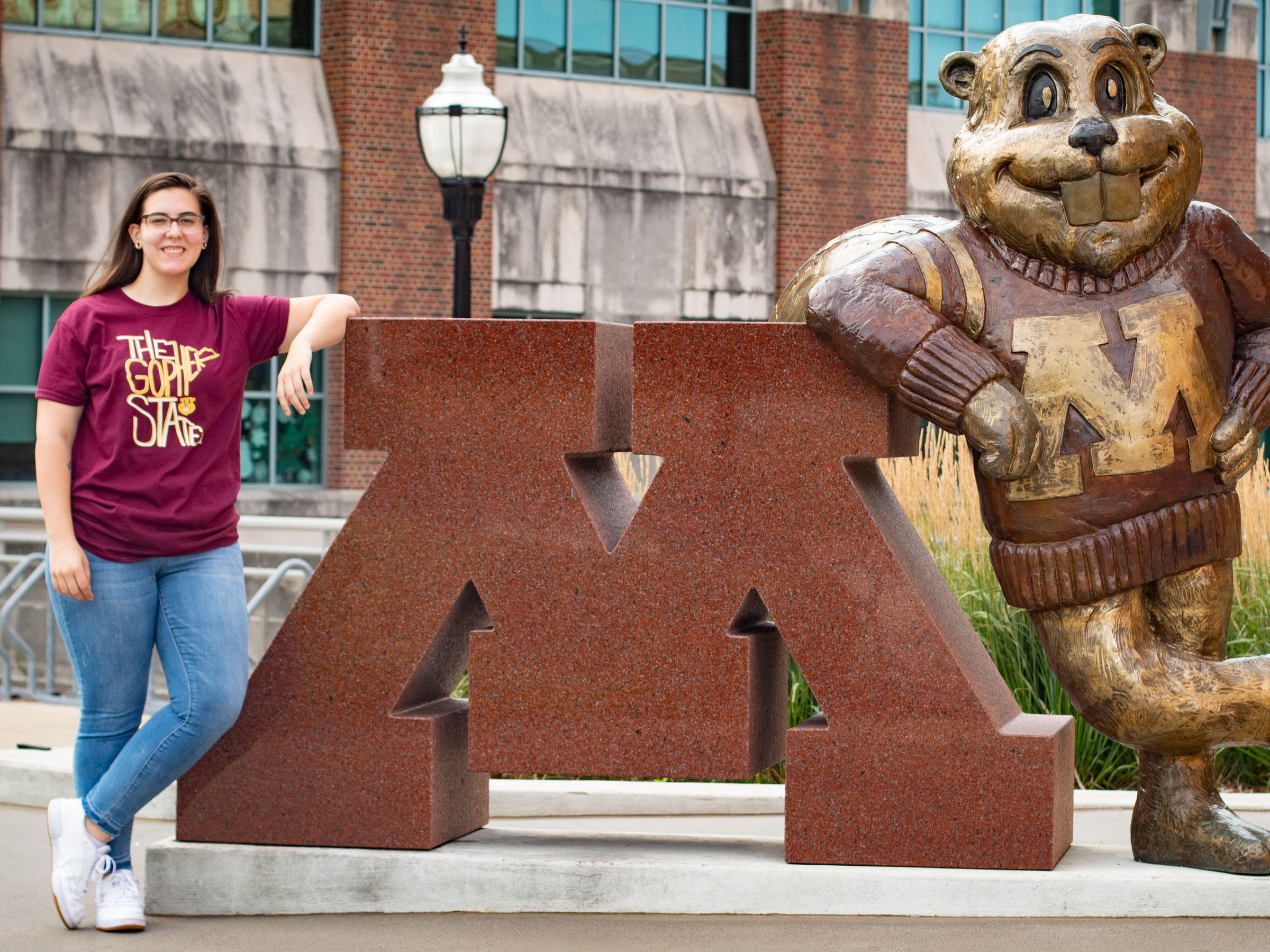 Hence, The Maroon Shirt® was born. Every fall since, the limited-edition shirt has been released with a new design, and this year, the design was created by one of our own—graphic design student Erin Suski (pictured above).

Taught by Adjunct Instructor Abbey Kleinert (Graphic Design), Erin was one of the students in GDES 3351: Text and Image who was challenged to design this year’s Maroon shirt. "I had the opportunity to connect with Dan Burdeski at UMAA and together we brainstormed ways that a graphic design class could collaborate with his work. He created the design brief for us and posed the overarching question: What does it mean to be a Gopher, past and present," explained Kleinert.

Together the class watched then-incoming President Joan Gabel’s inaugural speech and discussed the U’s history, landmarks, and the various meanings they hold for students. Each student then created their version of the shirt using a three-color design, two specific Pantone colors, and the University logo.

The students began the design process by hand-sketching quick ideas and sharing their initial concepts with each other. One-on-one consultations with Instructor Kleinert then prompted the students to choose three designs to further refine and then two designs to digitally render and show Burdeski for initial feedback.

"Since this work took place before the COVID pandemic," Burdeski reflected, "I had the opportunity to visit the classroom and watch the students walk through their vector artwork concepts, pose questions, and learn more about the story behind each concept. Each student had their own story. Some of them were very personal and some were focused on communicating more universal aspects of the student experience at the U."

After meeting with Burdeski, the students further refined their pieces and presented them during a pitch meeting at the UMAA headquarters in McNamara Alumni Center. The students each selected three keywords to describe their final designs and told the stories behind their choices.

Of the final designs presented, the UMAA chose Erin Suski’s "Gopher State" design, inspired by the history of the phrase and mascot as a political cartoon. "Originally drawn in the 1850s by R.O. Sweeney, the gopher was used to represent Minnesotan politicians over a controversial bill that was passed. The cartoon became famous and thus gave Minnesota the nickname 'the gopher state.' The U adopted the Gopher name in 1926 when football coach Clarence Spears, learned about this nickname," explained Suski.

Suski's shirt design is now available to UMAA members and represents the experience graphic design students gained during the process.

"This project gave students first-hand experience with turning an idea into a creative visual and taught them the process of working from abstract concepts like human connection and school pride to concrete and communicative images. They also learned the importance of crafting the 'story behind the design,' to both pitch the design to a team and also to connect with the design’s intended audience," concluded Kleinert.

Graphic design seniors graduating this summer are hosting a virtual exhibition to showcase their final projects on Friday, August 14. Titled “Fill in the Blank,” the exhibition theme is based around the idea of uncertainty.

Students in GDes 3353: Packaging and Display partnered with a student group from the College of Food, Agricultural and Natural Resource Sciences (CFANS) last fall to create a brand identity for a proposed tap house on the St. Paul campus.

Design and its Discontents

Whether it’s buying a coffee every morning or relying on take-out for dinner, convenience makes it easy to overlook the long-term consequences of our consumption choices. Last fall, graphic design students in 2399W: Design and its Discontents were challenged to examine their own consumption habits and create a tangible representation of what they discovered.