Paying it Forward: An Interview with Susan Hegland Blumentals (B.Arch ’59) 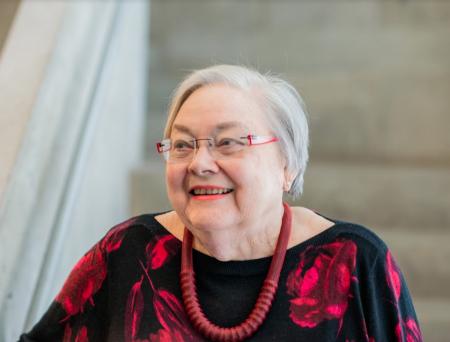 With the creation of the Janis and Susan Hegland Blumentals Scholarship, Susan creates a legacy that honors and assists students who have overcome adversity, as Janis did when he immigrated to the United States and as Susan did when she forged a space for herself at a time when very few women were in the program and field. Susan discusses her experiences in architecture and her hopes for the scholarship in the interview below.

What inspired you to start this scholarship?

Janis and I both had a tough time putting together the money for tuition because at that point there was no such thing as a student loan. At the time, a lot of potential scholarship programs thought that I was nuts because I was a woman pursuing an architecture degree. Why should they invest in that? But I was very lucky because I had a connection that helped get me an interview with a foundation in town and the foundation decided to fund my tuition for four years. Not everyone will be lucky enough to find someone who believes in them like that, and that realization seemed like an awfully good reason to set up this scholarship.

What was it like being one of only two women in your class?

When I started, there were 10 women in the school. But there was a huge drop-out rate because women had to decide between having a profession or having a family. You had to make your choice. There was one woman that graduated ahead of me and she was the first to graduate in a generation because the previous head of the school didn’t believe women belonged in the profession so he wouldn’t admit them. That changed when Ralph Rapson arrived.

During the thesis process, Ralph actually saved me because at that time we were assigned two crits for our thesis. The first man who was supposed to serve as my crit walked in and announced that a woman’s place was in the home. I never saw the other one. When both of them deserted me I went to Ralph and he stepped in to serve in their place.

How do you feel those experiences shaped your career later on?

My mantra became “I’m gonna be one of the guys.” If they were doing an all-nighter then I was too. I think that attitude is what really shaped my professional career as well as doing the tough stuff. At work and during presentations for city councils or planning commissions I went in with the attitude, “I’m not a woman, I’m an architect.” I didn’t see myself as being any different from the guys presenting things.

How did Janis’ experiences shape his career?

He had been in a displaced persons camp in Germany and was brought over by the Lutheran Church. He came to Minnesota in 1950 and he started pursuing his degree in 1951.

I think more than anything, he didn’t like presenting because of his accent. Because of this, he focused on working behind the scenes. When he opened up Blumentals Architecture in 1976 he became the nuts-and-bolts guy. He was always the one beating the bushes for new clients, and I got the fun part of designing and presenting.

What advice do you have for current architecture students?

Number one, don’t take yourself too seriously. Number two, learn how to sell your product with plain language. Architecture should be accessible, but it only can be accessible if people can understand what you say.

Judy Olausen (B.S. ’67, Related Arts) entered the University of Minnesota intending to study architecture. But a twist of fate and a full class led her to enroll in a photojournalism course taught by Dr. R. Smith Schuneman. It was a decision that would change her life.

From the moment you enter Doug and Ruth Crane's household, it is clear the space is home to an avid pottery collector.

An anonymous faculty member and spouse have committed $1 million to support graduate students at the College of Design.