Design Teachers Saved Me: An Interview with Judy Olausen

Judy Olausen (B.S. ’67, Related Arts) entered the University of Minnesota intending to study architecture. But a twist of fate and a full class led her to enroll in a photojournalism course taught by Dr. R. Smith Schuneman. It was a decision that would change her life. 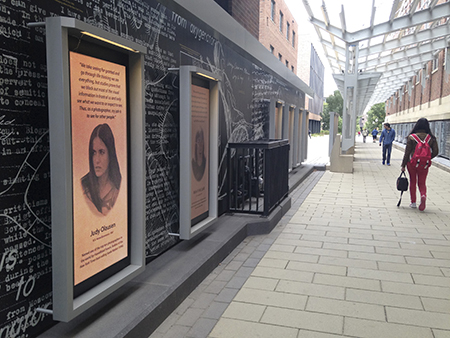 Now an internationally renowned photojournalist, Olausen credits College of Design faculty for teaching her the importance of design and helping her incorporate design-thinking into her work. To honor their impact, Olausen has dedicated her upcoming Norway House exhibition, “Mother”, to the College of Design and her mentor, Dr. Schuneman. In the following interview, Olausen discusses her experiences at the college, her work as a photojournalist, and the upcoming exhibition.

How did your experiences at what is now the College of Design impact you and your career?

I have always said that the design teachers saved me. I was a young, unsophisticated kid and the only thing I had going for me was a burning curiosity plus some luck because I landed amongst the most remarkable, sophisticated, kind teachers at the University. Those design teachers took me under their wing, woke me up, and gave me an extraordinary education that became the foundation of what was to come.

I know I could never have achieved the success I have had without insight and understanding of the importance of design because design flows through our lives and touches nearly everything we see and do. It has been said that design is the new money as it is vital to every profession and empowers us to think in untraditional ways. It can even provide a matrix for problem-solving. Unequivocally this gave me an edge in my chosen profession.

How do you decide on the subjects of your photography?

My goal has always been to inform and communicate narratives I feel are important but go unnoticed. My first series, American Artists, started because the Walker Art Center hired me to photograph artists featured in major retrospectives at the Walker. While artists have been photographed almost endlessly, they have not always been truly revealed because often they are photographed as second in importance standing beside their work. I quickly decided this was a story I could help communicate. I wanted to photograph and tell the story of every major artist in America. I applied for and received a large grant and moved to New York City, which I used as my base. With the assistance of Martin Friedman, director of the Walker Art Center, and Richard Oldenburg, director of the MOMA, I photographed almost 200 of the most important people in the art world in the United States. This photo series culminated with a show at the Walker Art Center.

What led you to document your mother and her experiences?

The Mother series is a very serious message about the cultural silencing of women and mothers during the 1950s and early 1960s, which I witnessed and was uniquely able and prepared to reveal. I wanted to present a history lesson to the next generation of young women and show them what they narrowly escaped. Thus the scenes presented in these photographs represent a decade characterized by a surreal synthesis of the silly, the grotesque, and the innocent, and captures the often-contradictory roles of the American housewife. It was a time before the Sexual Revolution and the advent of birth control, which represented great strides toward taking control over our own bodies, careers, and lifestyles. Almost unbelievably it was a time before some women were able to buy a car or get a checking account without the permission of a husband. This was a story I had to tell. I am primarily a photojournalist, so I had to find a new and different way to colorfully evoke this repressive time for women. For this message to be effective, I knew there had to be an element of humor. I didn’t want to deliver an angry message and it could not be subtle. If the photographs were funny but lacked depth the message would be lost and if they were historical but lacked humor, the gravity would be lost.

Eventually, the series became the book Mother and, upon its release, it broke sales records at the New York Times. My mother, sole model for the book, and I went on a 45-city book tour appearing on TV and radio daily including the Oprah show and an NPR special.

Why did you decide to dedicate this exhibition to the College of Design?

The education I received there was a magical gift that I can never repay. It laid the foundation for my professional and personal life. I am forever grateful!

What do you want exhibition viewers to take away?

I want viewers to experience joy at the colorful, in your face, almost cartoon-like photographs but also discover the message in these photographs of this era and appreciate what their mothers and grandmothers lives were like during this time.

What advice do you have to recent graduates who are trying to define their own career paths?

I say the same thing graduates may have heard before but it needs repeating: Listen to your own inner voice, your own intuition. Find something you are passionate about that gives you joy because every day it will be something that you run toward, not away from. My parents were horrified that I picked photojournalism as a career path and they tried to change my mind as they were convinced I could not make a decent living. However, I was so in love with Photojournalism nothing could change my mind.

From the moment you enter Doug and Ruth Crane's household, it is clear the space is home to an avid pottery collector.

For the second year in a row, an alumnus from the College of Design will receive the University of Minnesota Alumni Association’s U40 Award.