Hiding in Plain Sight: A Street Kid’s Journey from Female to Male, by PhD candidate Zane Thimmesch-Gill (Human Factors and Ergonomics), was nominated for a Lambda Literary Award in the Transgender Nonfiction category. In this interview, he describes design’s potential to address trans inequality. 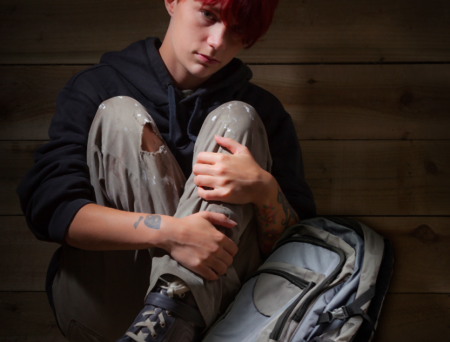 How did the experiences you describe in Hiding in Plain Sight influence your decision to pursue design?

I can’t remember a time when I didn’t understand that public spaces were designed with only specific people’s needs in mind. Bathroom stories are common for trans people, because it is a space that’s so clearly delineated in our society. But design decisions reach beyond physical spaces. As a child, I benefited greatly from initiatives that encouraged girls to pursue careers in science. Once I started to transition, I lost access to those supports. If anyone thinks that trans people are overrepresented in the scientific community, I can assure you that this is not the case!

When I was actively transitioning I had to stick up for myself a lot when design decisions like bathrooms and education systems were at odds with my needs. I was often told that I had to stop asking for special favors, because I had to understand that my gender and transition were very hard for other people. At the time I really bristled at that.

But now I can reframe their observations as a design problem. They were right; the way we have chosen to design our public spaces, education systems, scientific studies, etc., makes it very hard to navigate the inclusion of trans lives. We have considered a very narrow definition of needs in the past. Now it’s time to turn that paradigm on its head and demand that design play a large role in addressing these inequities.

You mentioned in an earlier interview that you want the book to demonstrate why we need to rethink social services for trans youth. Could you expand on that?

Many social services have the same tendency towards binary gender design as the rest of society. In the book I explain what it’s like to not be able to access shelter services because there are only female or male dormitories and by my teenage years—when I was on the streets—it was clear that I was neither.

Because a huge issue in social services is a lack of resources, design can make a huge impact. I was drawn to design as a career because money doesn’t always have to be the answer. Design combines creativity with multifaceted resources to upend the status quo and imagine a new way to provide services, or built environments or processes.

Do you think designers should have some basic diversity or cultural sensitivity training?

I like to believe that designers are passionate about creating things that have maximum positive impact. If that’s your goal, then the only way you’ll be successful is to get training in how other people’s lives are impacted by existing design decisions (or lack thereof). I would say that anyone who doesn’t pursue basic diversity or cultural sensitivity training is making a huge mistake. They’re putting themselves at a disadvantage by not accessing important resources that can help shape their career in a positive way.

Who do you hope reads this book?

For general readers, the book tells an action story. For designers and people working in social services, this book addresses the challenges our society creates for trans people. It’s an honest look into how devastating it is for trans youth to try to survive until adulthood. It also explores power dynamics on the streets, and the way that having too few resources can cause a community to turn against itself.

Although I fervently hope that this book brings these issues to light, I initially started writing this book for homeless and at-risk queer and trans youth. Much like Dan Savage’s “It Gets Better” campaign, I want queer and trans youth to understand that they are not alone in dealing with these issues. I want them to understand that they are up against great odds, but it is worth fighting through all the pain and suffering, because they can and will find peace.

Faculty and staff from across the College of Design are celebrating their latest book releases on Wednesday, November 20.

Be Kindly Curious: An Interview with Alumna Meenal Patel

Growing up, there weren’t many picture books where Meenal Patel (B.S. ’06, Graphic Design) could see herself, a lack of representation that persists to this day. After witnessing first hand the impact picture books had on her nieces, this alumna decided to pursue her dream of becoming a children’s book author.